Name: Christopher Lane
Medium: Paintings
Originally From: Minnesota
Now Located: West Columbia, SC
How Did You Get Started?: Lane spent his early years in Minnesota and Cairo, Egypt, and then upon being diagnosed with dyslexia, furthered his education at the GOW School in South Wales, New York, where he received guidance from Fine Arts teacher Bill Parsons. Upon leaving the GOW School, he spent a year in Paris, which fueled his creative instincts further. He returned to the US and pursued an art degree at Eastern New Mexico University but left to support a young family while serving in the US Navy as a submariner. Christopher uses fantastic imagery to turn his life experiences into visual stories that primarily focus on people and their relationships with one another.
What Do You Love About What You Do?: Christopher is a storyteller. Each painting can usually be broken down into several separate paintings or scenes yet are cohesive in theme. He uses symbolism, colors, and double imagery, along with many other techniques, to create an elaborate narrative on canvas.
Mission Statement: To draw the viewer into the work, seeing something for the first time, every time. 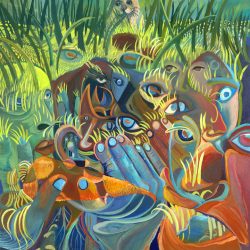